Malcolm’s talk about how he tries to garden in a way to create ‘dynamic stability’ where flora and fauna exist in harmony struck a chord with many of us. The State of Nature reports indicate that in Wales 1 in 14 species are heading for extinction, in a large part due to loss of habitat. To try and offset this even those with small gardens can help. Biodiversity was at the root of his message: diversity creates diversity, the greater the diversity in flora the greater the diversity in fauna.

Ideas he has implemented in his own garden: 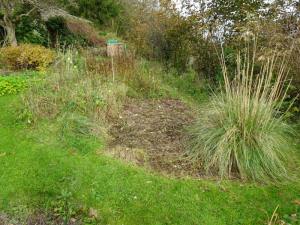 It was a very interesting talk and generated many questions from the audience.

Our August meeting is our members’ social evening when we meet for a relaxed get together bringing a plate of food to share. This year due to our increasing numbers, it is being held in the hall rather than a member’s home.

Pots planted for pollinators – with varying degrees of success!

The evening is also when we share the results of this year’s growing challenge. We were asked to plant up a pot with plants for pollinators. Do bring along your pots even if they haven’t turned out quite as expected – it has been a very challenging year weather-wise, but we can all learn from our successes and failures! If you can’t manage to bring the pot itself do try and get some photos of it and bring them along instead.

The evening will also be when we will be handing over our donation from the proceeds from the plant fair, a cheque for £500,  to Wales Air Ambulance.

The garden safari is a club event in which we get to visit the gardens of those club members who wish to participate. The number of gardens taking part varies year to year, this year there will be just 2, Yvonne’s and Tina’s. The date on which it will take place is Friday September 7th. More details will be given at the summer social.

A tip from Elena for watering…

And from Julian: we’re now having to use my huge number of water filled polycarbonate drinks bottles as a valuable water resource with our spring running low, but I also found that if you drill a tiny hole in the top of the bottle cap, upend it, and ram it into the soil beside squash, courgettes or tomatoes, it’ll deliver variable, but fairly slow water release over a few days – good if you have to go away for a weekend in hot weather.

From the white board: water Camellias and other Spring flowering shrubs now to encourage flowers next Spring.

Some plants which seem to be coping well with the lack of rain, and don’t need watering:

Plants John and Helen have found are drought resistant are: 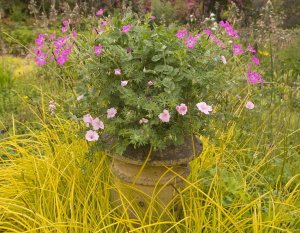 Julian and Fiona have found

John and Helen had their NGS open day on Sunday. All John’s hard work watering to try and keep the garden looking good along with a little bit of help from the storms of the previous week certainly paid off. The garden was looking beautiful. The sun shone and the visitors flocked in – John said it was their best day for several years.  As always, thanks from them to all their helpers and cake bakers and to John and Helen for their donation to Cothi Gardeners funds.

Gardener’s World: Keith Brown whom many of us know for his lovely garden and talks he has given to Cothi Gardeners in the past, has been filmed for Gardener’s World. The piece is due to be aired THIS FRIDAY 10th August at 9pm

Paul Green from Green’s Leaves Nursery will be paying us another visit after his very enjoyable talk last year….. and he will be bringing plants again! Put the date in your diaries: Wednesday September 19th at 7.30pm