Sadly, due to personal circumstances, Terry Walton, our speaker  for this month has had to cancel. We are hoping to rebook him for later in the year so don’t despair.

Due to the difficulty of trying to find a replacement speaker at this late stage we have opted to screen the film we were going to show at our November meeting instead.

“The Quiet American Gardener” is a film produced by the National Trust about Hidcote Manor Garden and it’s creator, Major Lawrence Johnston. The commentary was written by local garden historian, Penny David, and tells how Hidcote was created, developed and is now maintained. We get taken behind the scenes to meet the gardeners who follow in Johnston’s footsteps through the seasons.

Our March meeting was, sadly, the last one at which we will hear Richard Cain from Penlan Perennials as he is retiring in September. Richard has given us several entertaining and informative talks over the years on a variety of subjects and this one on Hardy Geraniums was no exception. 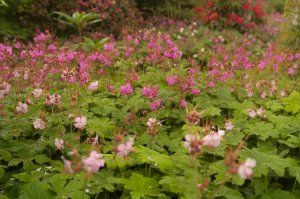 We will miss being able to access Richard’s immense knowledge for future talks and wish him well for the next exciting phase of his life. Click here for his website

It’s hard enough getting those fiddly seeds into compost or trimming just the right side-shoots without holding your mobile phone to your ear and providing a running commentary to thousands of Radio 2 listeners at the same time.

If you haven’t already guessed, our speaker in April will be Terry Walton. “The Life of a Media Allotmenteer” promises to give us a look behind the scenes as Terry tells us about life on his allotment in the Rhondda and how he has given growing advice on the radio each month for over twelve years.

A gardener of over 40 years’ experience, Terry has worked plots on the same site since he was a boy, learning from his father and other allotment gardeners. Many of you will be familiar with his enthusiastic style, so do come along on April 18th to meet Terry. Mobile phones not necessary! Click here for his facebook page.

Guests and visitors welcome, £3, to include refreshments. The talk begins at 7.30pm.

We now have a date for a spring social – which will be very kindly hosted by Elena, for a lunch gathering at her home Glanranell Barns on Wednesday May 9th.

Please bring a plate of food to share, and to ease parking issues, it would be good to car share if possible.

It’s probably still OK to cut back any Viticella, or later flowering Clematis, if you didn’t manage to do it in February, since there’s been so little growth so far this year.

Also Fiona’s tip is it’s not too late to take willow wands for making green sculptures or plant supports. 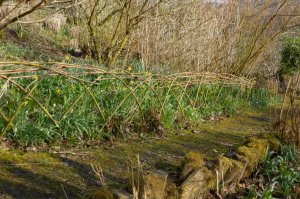 Finally if you’ve got any nectarines or apricots flowering under cover, don’t forget that there are very few pollinators around, or certainly not many that will make it into a greenhouse or polytunnel, unless you have a very nearby honeybee hive, so it’s worth hand pollinating the flowers – Julian uses a feather rammed into the end of a cane, to reach those high up flowers.