Because of ongoing Covid restrictions about physical meetings, and the cancellation of nearly all the meetings in 2020, the early meetings for 2021 are now planned to be ZOOM events, which whilst not being accessible to all, at least gives the opportunity for some members to interact in a remote way!

For anyone unfamiliar with ZOOM,  you need to send an email to cothigardeners@gmail.com to let us know so that we can send you the invitation to join the meetings. You don’t need to download Zoom to participate, just follow the link in the invitation email.

We are hoping to start in person meetings in October. These will be in the usual hall in Pumsaint and Elena will be updating members nearer the time on protocol for the meeting. Our November meeting will be by Zoom (see below for details)

Lizzie will be looking at the role of some of the wonderful nature reserves in west Wales and the challenges and highlights of protecting some of our most vulnerable species, from water voles to butterfly orchids’.

How this gardener is still learning to embrace and love her garden, (and most of the things that dwell within it). Many of us don’t inherit a garden that is a blank space. We may have our own ideas and planting preferences, but how the garden develops is also shaped by what is already there. I’ll be sharing thoughts on gardening, planting and some new favourite plants from the last few years spent working on the ongoing project that is our quarter-acre garden in Wiltshire.

‘The Answer Lies in the Soil’ – Philip Aubury

Good gardening starts here. Soil improvement, fertilisers and compost making. Philip trained at Birmingham Botanical Gardens and Pershore Horticultural College. He started his career as a nurseryman, then lecturer, followed by Parks Manager until  finally, in 1987, returning full circle as Director of Birmingham Botanical Gardens. He retired in 2007.

This will look at various aspects of wildflower hay meadows – their biodiversity, aesthetics, creation, ecology and management; and contrast this very briefly (since this is a time reduced zoom talk) with currently trendy “pictorial” meadows. 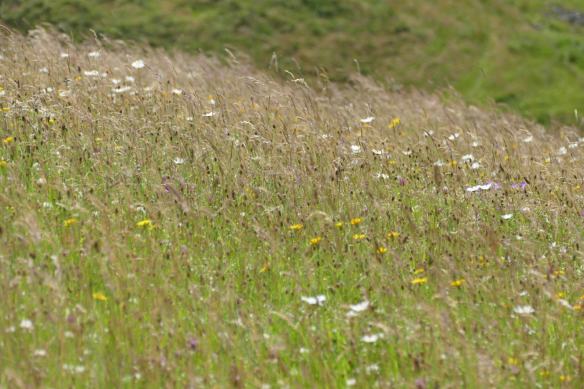 Next it’ll consider how we can learn from wildflower hay meadows to develop more naturalistic and diverse plant based communities in our gardens and show how these ideas have been incorporated in the development of our grass free ‘multicultural’ terrace garden over the last 25 years.

Finally it looks at how our terrace garden has developed, is maintained and changes through the seasons.

Lots of ideas for people to think about as our gardens are springing into life.

Wednesday, 19th May 7.15pm for a 7.30pm ZOOM meeting
Stephen Anderton – “Courageous Gardening”
A fresh approach to gardening. Stephen investigates gardeners’ techniques, ideas and inspiration, in everything, from breeding and pruning to planting and design. He shows remarkable gardens from all over the world and explains how their makers have single-mindedly planned and created exciting effects. The many unconventional ideas on offer here make this one of his most popular lectures.
Stephen is the long-standing garden writer for the Times, as well as a lecturer and author. Trained originally in Drama and then Landscape Design, he worked in historic gardens where, latterly as National Gardens Manager for English Heritage, he was responsible for several major restoration projects. Discovering Welsh Gardens was published in 2009; his official biography Christopher Lloyd, His Life at Great Dixter appeared in March 2010 and Lives of the Great Gardeners in 2018.

An environmentally conscious flower farm and floral design studio. Talk and tour followed by refreshments. Please let Fiona know if you wish to come no later than Tuesday 3rd August.

Outdoor visit to Vicki Weston Weston’s Salvias. Vicki gave us a talk a few years ago when she was based near Tregaron. She has now move from the to just north of Newcastle Emlyn where she is concentrating on her first love, Salvias. The visit will include a tour of her newly established display garden where she has some 70 – 80 different Salvias. She is also creating a large garden from scratch on a new and untouched site – definitely a work in progress but still plenty to see.

The cost will be £5 per person to include tea/coffee and cake.

‘After Dark’ A short film by Dave Bevan

Dave Bevan, a former member of Cothi Gardeners, had planned on putting together a film especially for the club which would have been shown last Autumn. Sadly Dave was unable to do this before he died last year. He did however give us permission to show the short film ‘After Dark’ which he made for the Small holders group he to which he also belonged. The film shows Dave’s amazing skill as a wildlife photographer.

Gardeners are well aware of the need for pollinators but for many people this important area of plant science begins and ends with bees.  In fact pollination can be carried out by animals as different as bats and snails – the former is limited to night flowering species and the latter is only for plants with time on their hands.  Many trees, grasses and others do not use a pollinator trusting in fate but releasing their pollen into the wind and hoping that the grains land on a suitable female flower. This lecture looks at the variety of animals and other vectors that are exploited by plants and explains why this knowledge is so important.

Timothy Walker is the last of our ‘big name’ speakers and comes highly recommended by an old friend of the club, the late Keith Brown of Cilgwyn Lodge.

From January 1986 to July 2014 he worked at the University of Oxford Botanic Garden & Harcourt Arboretum, firstly as General Foreman, then as Horti Praefectus (from 1988) and finally as Director (from 2002).  Between 1992 & 2000 the OBGHA won 4 gold, 2 silver-gilt, and one silver medal at the Chelsea Flower Show London.