Julian Wormald:  “Confessions of A Galanthophile”. 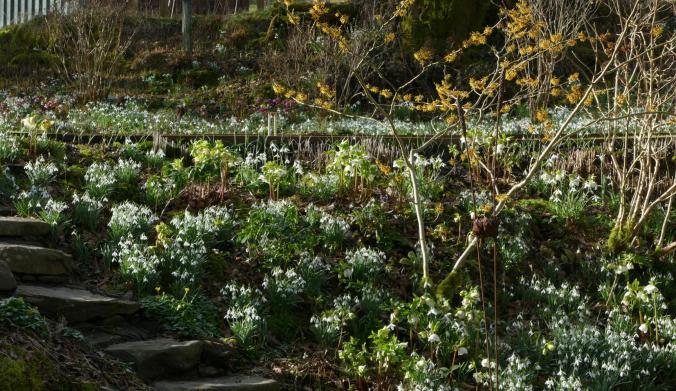 Julian will explain why he loves snowdrops, tell you a little about snowdrop species and distribution as well as some interesting facts about snowdrops. He’ll talk a little about snowdrop myth and history, snowdrop cultivation, and some of his favourite cultivars. You’ll also hear a bit about his unique and ongoing Historic Welsh Snowdrop Hunt, which is slowly establishing a collection of Welsh native snowdrops from pre 1850 sites. Finally there will be a quick fire auction of some snowdrops to raise funds for the club, and a range of named snowdrops for sale.

More information and photographs of snowdrops at their garden can be found on their website … www.thegardenimpressionists.com

Alun and June Whitehead: “Irises For the Natural garden”. Plants for sale.

In a late change to our programme,  Brinley Watkins is sadly unable to visit us to talk about “Vegetable growing with a twist”.  But we’re delighted that Richard Bramley, who’s visited us several times from local Farmyard Nurseries,  has agreed to come at short notice and talk to us about  plants to take us through autumn and into winter. Members will know Richard always gives us a great talk, and he’ll also be bringing along plants for sale.