A little while ago I had an email from Maria Cannon asking whether she could write an article for the website on the subject of how gardening promotes general well being and mental health. “Gardening has been a blessing for me, helping me work through the depression, anxiety and pain I experience as a result of fibromyalgia. I’d love to spread the word about how gardening benefits the mind, body, and soul.”

The consensus of the Cothi Gardeners committee was that it could be a useful and interesting thing to do. The following is the finished article. Many thanks to Maria for sending it in.

How Gardening Promotes Physical and Mental Health by Maria Cannon

Gardening promotes physical and mental health through a variety of ways. It promotes relaxation and overall life satisfaction, better nutrition, and physical activity. Gardening can be a catalyst to improve your life in multiple areas, giving you a better and longer life to enjoy.

Backyard gardening is great from a nutritional standpoint. After starting a garden, you may take an interest in the origins of other foods you consume, and thus make better choices about what you eat. Maybe you enjoy it more because it’s fresher, or maybe you savour it more because of the effort it took to get to the table, but food you grow yourself just seems to taste better, which makes consuming plenty of vegetables and fruits a lot easier.

Since you’re the head gardener, you get to decide what kinds of fertilizers and pesticides you allow and don’t allow to touch your food. You also have more control over when to harvest. Waiting to pick vegetables and fruits until they’re truly ripened ensures they have their maximum amount nutrients locked in, which isn’t the case for some store-bought produce that must be picked early.

A Form of Exercise

Have you ever worked in your yard all day and woke up the next day feeling quite sore? Believe it or not, gardening can provide the same exercise as walking or riding a bike. Of course, it really depends on which activity you’re doing and how long you do it. While weeding, digging, and planting are on the lighter side of the spectrum, cutting down bushes, digging up stumps, and mowing your lawn rank on the higher end. The disabled, elderly, and those suffering from chronic pain can benefit immensely from the lighter gardening activities. If you need more vigorous activity, you can take on the harder jobs.

Gardening works your legs, buttocks, arms, shoulders, neck, back, and abdomen. It builds muscles and burns calories. Just 30 minutes of gardening several times a week can help to increase flexibility, strengthen joints, decrease blood pressure and cholesterol levels, lower your risk for diabetes, and slow osteoporosis. You can even break the 30 minutes up into smaller, eight-minute intervals if you need to, and you’ll still reap the benefits.

A Method for Improving Mental Health

People who garden are less likely to have signs associated with unhappiness or depression. Gardeners score higher than the average person on depression screening measures. They’re more likely to report that their life is worthwhile and report an overall satisfaction with their lives. In fact, 80 percent of gardeners feel satisfied with their lives, while 67 percent of non-gardeners feel the same. And what’s even more telling is that an astonishing 93 percent of gardeners believe gardening improves their mood.

Gardening is a great tool to add to an individual’s treatment plan for depression. Depression affects our bodies in a negative way. It can affect appetite and cause digestive issues, result in lack of sleep or constant sleepiness, and even make an individual more prone to diabetes, heart disease, and drug and alcohol addiction. Those who suffer from mental illness are four times more likely to abuse alcohol and 4.6 times more likely to engage in recreational drugs. Keeping your mental health in order helps to keep the rest of your health in check.

Growing your own food is fairly simple. It mostly requires patience. Many vegetables, fruits, and flowers are great for a novice gardener, so don’t worry if you have zero experience. When just starting out, plant things you’ll likely eat or flowers you really enjoy looking at, and don’t go overboard with the size of the garden. Be sure to research spacing, sunlight, and watering preferences for the plants you choose.

Farmers and other backyard gardeners in your area are great resources. They can give you advice on what to plant for your region and answer any questions you may have. If you lack the space for a garden, many plants can thrive in a container. You can also search for a community garden near you if you don’t have the space for a garden.

Gardening is fun, and it’s good for you. It feeds the body, mind, and spirit in a variety of ways. Preparing fresh and healthy foods at home is easier when you have the food at your fingertips. You’ll also get in exercise and improve your mood. This year, be sure to take advantage of the many benefits of creating your own garden.

The last day of the heatwave saw a big turnout at our June meeting to hear Kari-Astri Davies talk on scented plants. The meeting was preceded by a very successful Pie Night at the Dolau Cothi – 25 of us including Kari and her husband Philip – it was the maximum the Dolau Cothi could accommodate! Well done to Jane ‘the Pie’ Holmes and Dave and Esther for all their hard work organising, cooking and serving to make it all run so smoothly. It is proving to be an excellent way to enjoy each other’s company in convivial surroundings. Next Pie Night will be in September so mark it in your diaries and book in quickly as, if numbers increase again, sadly some will end up being disappointed.

A big thank you to Anne for treating us to some delicious muffins to go with our tea before the evening’s talk. These were a thank you to all members from Team Large for everyone’s support for their Snowdon Night Hike

Scents and Scentsability – Gardening led by the nose

Kari-Astri Davies talk ‘Scents and Scentsability – Gardening led by the nose’, was fascinating, covering scents both pleasant and foul, through different seasons, daytime and nocturnal. Brilliantly researched, it was packed with interesting and amusing information and anecdotes and together with her excellent photographs held us all spellbound for the duration. If she hadn’t told us it was her first talk we would never have known. Anyone interested can follow her blog by clicking here. http://karisgarden.co.uk/ 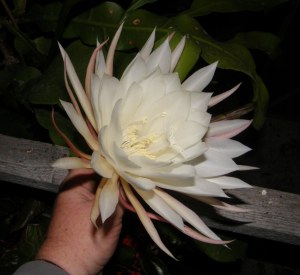 A handful of interesting points were….. 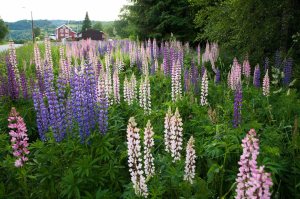 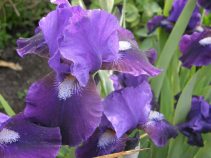 Plants that release their fragrance at night are usually aiming to attract night flying pollinators such as moths. Kari recommended an excellent book called ‘The Evening Garden’ by Peter Loewer. 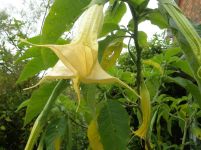 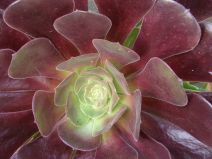 Our next meeting will be on July 19th, starting at 7.30pm when our speaker will be Jenny Matthews. 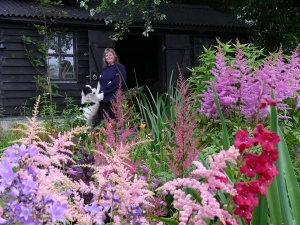 Jenny and Kevin Matthews run Moorland Cottage Plants, a nursery and garden near Crymych in Pembrokeshire. Their site is on the northern slopes of the Preseli mountains and often exposed to wind and very low temperatures in the winter. So, Jenny is certainly qualified to present to us an evening of ‘Plants for Problem Places’. Whether you have a large or small garden, there are sure to be one or two spots where you’re not sure just which plant will thrive. Come along on 19th July for some tips and advice. Jenny will bring some plants for sale, grown at her own nursery. She does not use a polytunnel so all her plants are hardy and ready to go straight into your garden. More information can be found at www.moorlandcottageplants.co.uk

Our website has a page on members plant favourites and it would be lovely if more folk could contribute towards it. All we need is your favourite plant for a particular month – and if you can do more than one, that would be great! Please email your favourites to Fiona at cothigardeners@gmail.com

The gardens of Brenda and Angela and Martin had a successful open day for the NGS on Sunday 25th June. Both gardens were looking beautiful – even in the rain when some of the photos were taken. Fortunately the weather perked up and was mainly dry for the most part. The following are summaries of the day by Brenda and Angela:

Despite the fact the weather was a little kinder than last year we still had a busy and enjoyable day although numbers were slightly down on the previous year.

I would like to say a huge THANK YOU to all who donated cakes and helped on the day especially, Yvonne, Penny and Elena for (wom)manning the refreshments which has earned £100 for Cothi Gardeners funds,

and also to John & Helen for doing a magnificent job on the plant stall which raised £300 for the NGS.  Really couldn’t do it without all your help. Brenda

Sculptors Open Garden Sunday 25th was a successful day. Although the afternoon was rather grey the rain managed to hold off with only a few minor drizzles. A steady flow of visitors made for a very pleasant afternoon meeting some very nice people and having some really interesting conversations.

It is always good to meet people who have lived in or know the property and of course it is very rewarding to see that those people are enjoying the changes that Martin and I have made to the garden. Those that had visited the garden before also seemed to enjoy the changes that had been made to the meadow and mini woodland area which was newly acquired last year and is in contrast to the neat walled court yard garden. 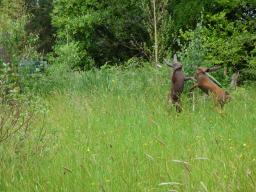 The plant that stole the show was once again Cornus kousa var. chinensis with its wonderful white bracts. 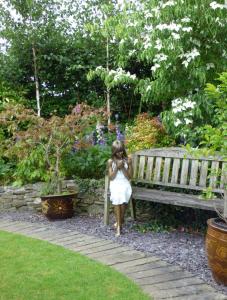 The unique  feature about this garden is the way it envelopes and forms backdrops to the sculptures that have been created by the ourselves, husband and wife,  Martin Duffy & Angela Farquharson. In all it was a most enjoyable afternoon raising funds for the NGS of £285 and jointly with Bwlchau Duon raised over £1000. A further £233.50 was raised from tea and plant sales at the Sculptors Garden for St Richards Hospice, Worcester who took such good care of Angela’s father before he passed away in 2016.

“ Thank you so much all visitors, helpers and cake makers for supporting this event, it could not be done without you all.”

Julian and Fiona finished their year of opening their garden for the NGS on Saturday with a special opening with guided meadow walks and discussions for National Meadows Day. It was a highly successful day, if exhausting(!) with both morning and afternoon slots full – no more parking spaces! The weather smiled and showed off the flowers in the meadows and the garden itself to perfection. Our visitors on the day came from far afield (Manchester, Gloucestershire, Glamorgan and included an NGS trustee, one of Highgrove’s gardeners and a retired garden designer with 5 Chelseas under his belt!) as well as more locally and it was lovely to see several familiar faces amongst them.

This has been our most successful year of opening the garden with 144 visitors, more than ever before. 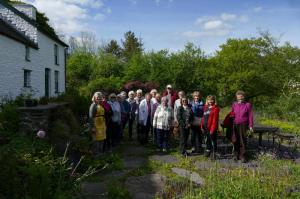 Thank you to those who came and helped Fiona with teas for the larger groups, it was very much appreciated.